Events
About Us
Newsletter

Over a period of five decades, the semiconductor industry has improved the performance of computer chips by roughly 50% annually. This remarkable achievement—described by Moore’s Law—is one of the exponential phenomena of our age, responsible for accelerating changes to our lives and societies in ways that are, if not unprecedented, rare in human history.

In his new book The Exponential Age, Azeem Azhar argues that we are living in a time of unusually fast social change as a result of these dramatic improvements in technology.

“In the early twenty-first century, the defining technologies of the industrial age are metamorphosing,” writes Azhar, an investor, entrepreneur, and creator of the popular email newsletter Exponential View. “Suddenly, our society is being propelled forward by several new innovations—computing and artificial intelligence, renewable electricity and energy storage, and new breakthroughs in biology and manufacturing.” (p. x)

The result is that there’s an “exponential gap” between the changes to society and the responses of institutions, such as governments, which tend to evolve in a slower, linear fashion. (Azhar defines exponential technologies as ones that improve their performance for roughly the same cost by more than 10% annually for several decades—the advances compound in accelerating fashion.)

There are examples of this all around us. Superstar tech companies like Amazon, Google, Apple, and Facebook have accumulated massive market power in shockingly little time, and industrial-age antitrust enforcers have been slow to understand and craft approaches to address it. Similarly, the traditional norms and regulations around employment are inadequate in the face of gig work directed by computer algorithms, as with car and delivery services like Uber. And our established protections for individual privacy and speech fall short of what’s needed when private companies have such extensive visibility into and control over what we see and do.

The Exponential Age provides a clear conceptual framework for understanding many of the biggest societal challenges today, as technologies gallop ahead and institutions adapt much more slowly. It could offer deeper analysis of advances in areas outside of computing such as biology. But it is a very readable explanation of why it’s hard for humans to understand exponential change and how that’s a major blindspot at this unique moment in history with numerous exponential developments.

The right “what-if” questions. HR/People operations leaders need to solidify their roles as trusted partners to senior leadership, and “what-if” scenario planning is a way to accomplish that. In a moment of great uncertainty, when conditions are changing week-to-week, it’s more important than ever to be able to answer critical “what-if” questions with speed and agility. Here are three good "what-if" questions to consider.

Azhar offers predictions about where the technology will lead us, including a shift away from globalization to local economic production of goods and food, a transition to inexpensive renewable energy, and the widespread availability of genomic sequencing and much more personalized and preventative health care. “In short, we are entering an age of abundance,” he writes. “The first period in human history in which energy, food, computation, and many resources will be trivially cheap to produce.” (p. 256)

Among Azhar’s other interesting observations and contentions:

Azhar notes that human beings are generally bad at getting their heads around exponential change. Numerous studies show that we generally underestimate what happens when growth—such as that of  an investment—compounds over time. And the speed of technological change amplifies that. If you increase something roughly 40% annually—approximately what Moore’s Law describes for chip performance—the compounding means that over three decades it will have grown 32,000-fold.

Among Azhar’s prescriptions for fixing the problems of our Exponential Age:

The bottom line is that The Exponential Age does a great job of explaining why technology is impacting our work and society so dramatically, and whyour norms and institutions are struggling to adjust. It provides a timely reminder of the power of exponential changes and offers helpful theses about where trends are leading us.

You can order The Exponential Age at Bookshop.org or Amazon. (We may make a commission when you buy a book.)
Read an excerpt in Wired. And read all of our book briefings here.

Goodwin focuses in Leadership on the seminal trials of four US presidents, relevant to our own moment in history.

Battilana and Casciaro do an impressive job of providing a simple structure for thinking about how power works and encouragingly suggest that it’s possible to exercise it for good. Along the way they offer insights into how we can better navigate questions of power in our daily lives. 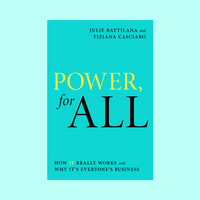